Coinciding with the decline in the broader cryptocurrency market, the growth of Bitcoin (BTC) ATMs installed around the world has also been impacted by coming to a halt for the first time in history.

According to data collected by Finbold, there are 38,538 crypto ATMs in 77 countries Coin ATM Radar stats retrieved on September 23, 2022.

While this is a marginal increase since the beginning of September, 38,458 is still a decrease from the total number of installations as of August 1. Notably, the number on the date was 38,757, showing that crypto installations haven’t made any significant progress in nearly two months ago. 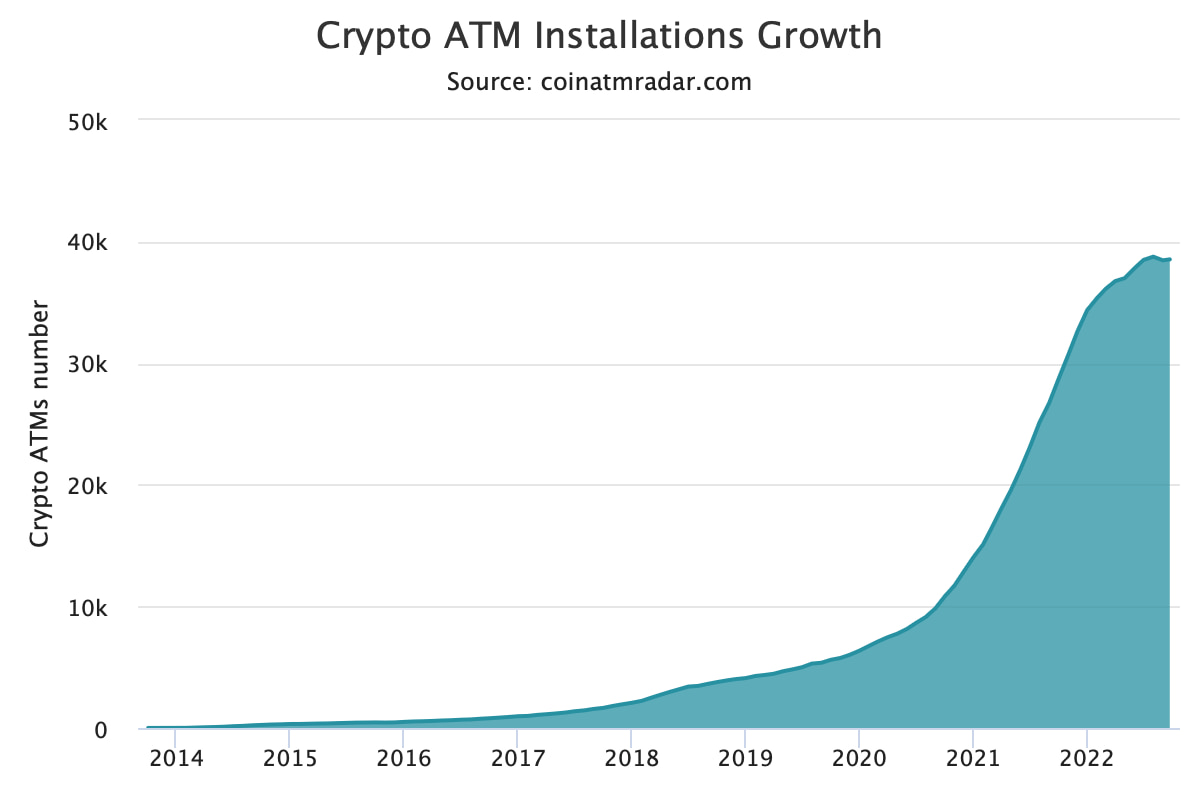 The revelation shouldn’t come as a surprise, as Finbold reported that the expansion of cryptocurrency ATMs worldwide fell 32% in the second quarter, from 2,362 to 1,600 machines.

At the beginning of the year, there were 34,370 cryptocurrency ATMs, but after the first quarter, that number rose to 36,732 units. After the second quarter, 37,642 ATMs were installed.

Decline of the crypto market

The growing value of the market in 2021 led to an increase in the number of cryptocurrency ATMs being installed; however, this pattern has since stalled. For example, the price of Bitcoin fell from its all-time high of about $68,000 in November 2021; the digital asset struggles to support more than $20,000.

Interestingly, in the second quarter of 2022, Bitcoin saw one of its worst performances in more than a decade. According to research by Finbold, Bitcoin’s value fell more than 56% during the quarter.

As a direct result of the market crash, several companies in the cryptocurrency industry have had to rethink their business strategies. In anticipation of a possible future market recovery, some organizations are forced to stop their activities and reorganize their plans.

In general, cryptocurrency ATMs help to accelerate the widespread adoption of various assets. However, it is essential to note that ATM transactions do not affect the available liquidity of the market; their sole purpose is to help investors acquire cryptocurrencies in exchange for fiat money.

Where do cryptocurrency ATMs go?

With increasing regulatory concerns, the future of the installations is of great importance. Some governments are preparing to adopt a cryptocurrency regulatory framework to fight illegal activities such as money laundering.

Law enforcement officers have already started discouraging the use of cryptocurrency ATMs. Last November, the Federal Bureau of Investigation (FBI) warned that crypto ATMs and QR codes are being used by hackers to trick people.

In a separate development, the United Kingdom’s Financial Conduct Authority (FCA) demanded in March that all crypto ATMs in the country immediately stop serving customers or face legal consequences.